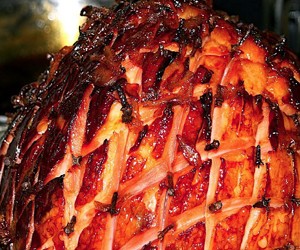 I just love gammon at Christmas, in fact I’m not sure why we seem to make it only at Christmas. It’s fantastic and it sits in the fridge after Christmas for those perfect snack and sandwiches and is completely foolproof to make.

Place the ham into a large pot and cover with cold water, then toss in the onion halves and celery. Bring the pot to the boil and drain. Clean out the pot, place the gammon back into the pot and refill with water.

Stud the onion halves with 2 cloves and add to the pot. Bring to the boil, reduce heat and simmer on low for 2 1/2 hours.

Take the pot off the heat and set aside allowing the gammon to cool in the liquid.

When cool remove from the water, the skin will be east to remove now. Remove the skin and score the fat diagonally into diamond shapes.

Melt the butter in a pot over a low heat, add the sugar and mustard and mix until well combined.

Brush the gammon with glaze and stud with cloves, then place it in a 200 Celsius preheated oven for about 40 minutes until nicely brown. Remove and brush with the rest of the glaze.

If you like to add cherries and pineapple, add them at the end. Here is a Christmas Turkey recipe , a Christmas cake recipe and of course, perfect roast potatoes. See all of the Christmas recipe ideas