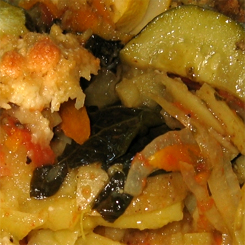 If there was ever a way to get kids to eat their veggies then this has got to be it. It’s a potato bake version which includes a whole lot of other vegetables with a very tasty and creamy sauce topped off with cheese. It’s a vegetarian meal on its own and you could quite easily add chopped chicken  to it as well for a complete meal.(4 people)

Heat your oven to 180 Celsius.

Rub the butter onto the base and sides of a 23cm square or similar casserole dish.

If you are adding chicken to it just make an extra layer with the chicken.

Once the dish is full, pour over the rest of the soup and spread it evenly with a spoon. Top of with a layer of grated cheddar cheese and pop into the oven with a lid on for 1/2 an hour. Then remove the lid and bake for another 10 minutes.

You could quite easily use broccoli or cauliflower as well, just make 2 different layer types, 1 of potato and the other of the rest of the veg and repeat twice.

This is so easy and tasty it’s worth making every day! Try this Traditional Moussaka recipe for something really special.