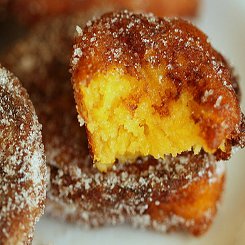 I had pumpkin fritters that were bought from Woolies and although I enjoyed them, there is nothing like home made pumpkin fritters doused in cinnamon sugar to deal with a comfort food craving. I turned to a trusty book by Lannice Snyman called tortoises and Tumbleweeds and found a really fantastic recipe that did the trick. Try them, they are real simple and the taste, well let’s just say I ate for three. (enough for 4 people if you are not me)

Place your pumpkin cubes and water with the pinch of salt into a pot onto the stove, bring to a boil and then turn down to medium and allow to simmer for about 20 minutes or so until the pumpkin is nice and soft. Drain off the water, allow it to cool for a few minutes and then mash it well.

Put a pot with about 6cm of oil in the bottom onto a medium to high heat before you continue.

Once the oil is on and the pumpkin well mashed transfer it to a mixing bowl and add the egg, flour, baking powder and cinnamon. Give it a good mix to distribute all of the ingredients.

Now take a small amount of batter and test to see that the oil is hot but not too hot. The batter should bubble gentle and not bubble over.

Take tablespoon sizes and drop them into the oil, doing about 6 at a time until they are golden brown and crisp all over.

Place the cooked pumpkin fritters onto some kitchen paper to remove some of the oil and then cover in the cinnamon sugar mixture.

There are few things that will satisfy a craving like these little beauties. I also made the Denningvleis for some friends a while back from the same book which was a real hit.