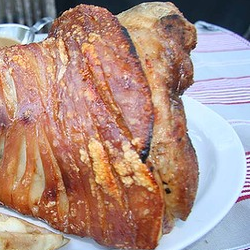 This is the easiest way to cook eisbein. It removes some of the fat, cooks it through and you have control over the crackling and the crackling is what it is all about after all 🙂 Ever since I had eisbein at a restaurant near the Randburg magistrates court, I have tried to get that same tenderness in the meat and the crisp crackling and think this eisbein recipe is pretty close.

Update 2017: I have been eating a lot of pork the last year or so, tried many ways of cooking it and even tried jamie Olivers way of cooking pork belly, but there is nothing to beat a good eisbein.

If you want to know how to cook eisbein, this is a tried and tested recipe that has been the winner every time. 🙂 enjoy it folks, until next time.

Place the pork shanks into a large pot, add all the rest of the ingredients and put in enough water to cover the pork shanks. Bring it to the boil and then reduce heat and allow it to simmer for about 1 and a half hours.

The meat will be tender and the skins soft. Remove them from the pot and pat dry with a cloth, score the skin diagonally with a sharp knife and salt the skin well.

Place under a hot grill allowing the skin to crisp up. Keep an eye on them and turn to crisp the entire outside. Best served with boiled potatoes tossed in butter and parsley with sauerkraut and strong mustard. Also put some apple puree on the table… you are going to love it.