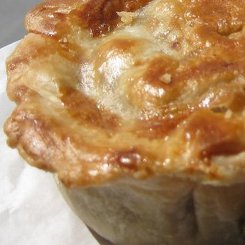 I have had a few requests for pie recipes lately which is probably on account of the weather cooling down and this weekend was perfect to try out a homely steal pie recipe. This recipe can easily be adapted to make a pepper steak pie by adding cracked black pepper so for those who have requested pepper steak pies, this is for you as well. You want a steak that has little fat on it like sirloin or some good chuck that has had the fat removed. The recipe can be used to make 6 individual pies in foil pie tins available from any supermarket.

500g frozen puff pastry that has been thawed
1 beaten egg

Place about a tablespoon of oil in a pan on a medium to high heat on the stove and cooked the onions until they are softened but not browned. Now add the steak cubes and toss them around until the pieces are sealed on all sides.

Now toss in the beef stock, Worcestershire sauce, tomato paste and wine if you are using wine, reduce the heat to medium low and allow it to simmer for about 40 minutes with the lid off. Stir it occasionally and allow the liquid to reduce and the meat to cook through.

You will still have a fair amount of liquid in the pan so now we need to thicken it up by adding the flour and water mixture. Bring it to the boil after adding the flour mixture and stir it constantly for about 2 minutes. Remove from the heat and allow to cool while you prepare the pie cases.

Flour a surface and unroll the puff pastry, dust the top with flour and using a rolling pin or wine bottle, roll it out to about 3mm thick. If you are using individual pie cases cut a circle that will fill the pie case and flop over the edges a little as well as 6 further pieces to cover the top, press into the pie case and trim off the remaining pastry from the sides.

Fill the pie cases equally with the mixture, place the tops on and crimp the edges together with your fingers to seal the pastry. Pierce with a fork or knife on top, brush with the beaten egg and pop into a 200 Celsius over for 20 minutes or until the pastry is beautifully gold and crisp.

This steak pie recipe can easily be made in a large pie dish as well, I don’t put pastry on the base of the dish but cover with a thicker piece of pastry on top with is straight from the pack, no rolling, just cover, pierce and brush with egg.